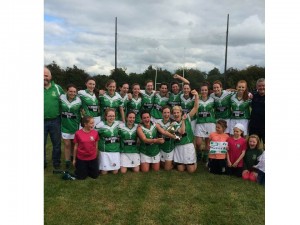 Sunday 28th September
Well done to the team and management.

2 walkovers and team is out of the competition.

It was a tough physical game that saw Moorefield win out at the final whistle with a score line of Eire Og 1.06 to Moorefield 4.10. The game began with both teams fighting hard for procession, Moorefield after a few missed chances were first on the scoreboard with a well taken point from Dearbhail Kelly. Eire Og were fighting hard and had a few chances at the Moorefield goals  but unfortunately the shots went just wide of the post. Dearbhail Kelly scored another point for Moorefield  in the first few minutes of the game. Moorefield seemed hungry for a goal but were denied by some great goal keeping from Aisling Delaney. After a great play by the Moorefield centre half forward line of Ciara Conaty, Derbhail and Serena Donnelly the ball was sent it to the waiting full forward Laura Hannon. Laura Hannon took a cracking shot at goal , Aisling Delaney could not get her hurl to and it hit the back of the net for Moorefield’s first goal. Eire Og’s first score of the match came shortly after this with Muireann Tutty putting a fine point over the bar. Moorefeild seemed to find their stride and some great plays ensued from their forward line to see them add two more points from Dearbhail Kelly and smashing goal from Ciara Conaty  just before half time. Half time score line Moorefeild 2.06  to Eire Og 0.01.

It was Eire Og that came out fighting in the second half. Strong defensive play from the back line and impressive team work from the mid field and forward line saw Eire Og’s Muireann Tutty and Sarah Fitzsimons add a further three points to the score board. Moorefield were slow to start in the second half but were woken up by Eire Og’s fighting spirt at the start of the second half. Dearbhail Kelly yet again showed her great skill by adding another point to Moorefiled’s score. Following this a great  run through the Eire Og backline and a powerful shot at goal seen Laura Hannon hit the back of the net for another goal for Moorefield. Eire Og worked extremely hard to fight against a Moorefield side that was pulling ahead of them. Fantastic effort from their midfield and half forward line seen them add a further two points one form play and another from a free both taken by Sarah Fitzsimons. But Moorefield were not finished yet a low ball came in on the Eire Og back line to be picked up by substitution Louise McMullen and struck into the back of the net with another fantastic goal for Moorefield. There was no stopping Moorefield with ten minutes to go Dearbhail Kelly yet again  putting a well taken free in between the posts to add to the impressive Moorefeld score line. Ciara Conaty made some great solo runs down the line to lose her player and add a further two points for Moorefield. Eire Og showed great determination and kept fighting and pushing in on the Moorefield back line. A high ball into the square by Amy Fitzsimons ended up in the back of the Moorefield net when Moorefield’s Niamh Brennan tried to block it down, it deflected off her hurl to score the final score of the match and a much deserved goal for Eire Og. The final score line, Moorefield 4.10 Eire Og 1.06. There were impressive performances for Moorefield by Clodagh Cummins, Dearbhail Kelly. (1.08) Ciara Conaty (1.02) Louise Mc Mullen (1.00) and Laura Hannon(2.00). Eire Og ‘s Sarah Fitzsimons and Muireann Tutty also put in impressive performances.

This entry was posted in Junior Team. Bookmark the permalink.