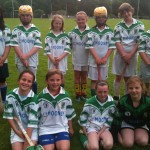 Whilst we would like to see the games played on the above dates we would like to point out that games can be played on alternative days in the same week as allocated if necessary (except in the last week where it must be played by the Wednesday): it is essential that slippage doesn’t appear.

All results must be given in by June 15th latest to allow the necessary time to organise the Finals day; arrangements cannot be delayed because a game(s) hasn’t been played by June 13th.

Should a team not fulfil all its fixtures within the timeframe, a decision on qualification for the finals day may be taken by the committee in charge.

(With co-operation and goodwill between clubs and mentors it should be easy to arrange max. 4 dates (3 in group blue) between now and 13th June).

Remember, u12 mini-leagues are played under full camogie playing rules (Not Go Games playing rules); please ensure that your referee knows this in advance, qualified camogie referee’s to be used not go games referee’s.

Club named first is home club, they must make contact with the travelling club as early as possible but no later than 3 days before the scheduled date.

As there will be no playoffs in this league,the following will apply:-

In the event of teams finishing on equal points.

If that was a draw, score difference and then highest score will decide.

All agreed fixtures must be sent to your group co-ordinator prior to commencement of the leagues.

The following co-ordinators have been appointed to the groups.

Results must be sent to group co-ordinator within 48 hours to claim the points.

All games to be played under full Camogie rules

Teams     11 a side (minimum of 9 per team, other team must match), unlimited substitutions can be made but only during break in play and all players must be named on the team sheet.

In advance of the 1st match all teams must submit a list of players for their panel to the registrar at kildarecamogie@yahoo.ie , any additions to this list during the competition must be emailed in advance of playing, team sheets must correspond with the list given to the registrar.

This entry was posted in Under 12. Bookmark the permalink.